How a Laser Works 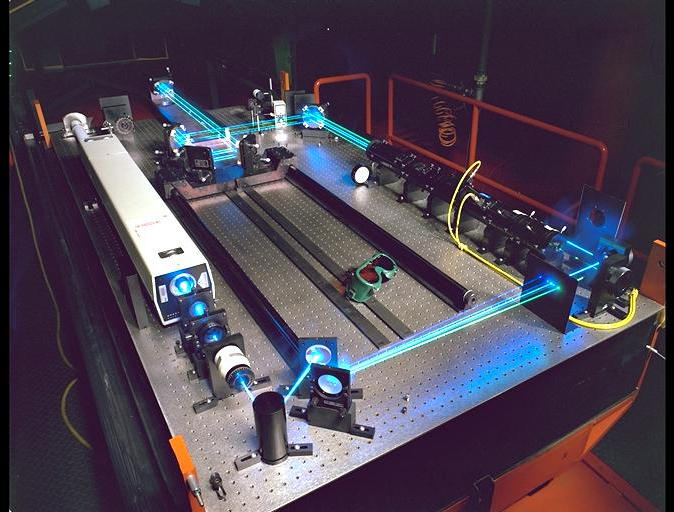 The Electromagnetic Spectrum and Quantum Energy

Einstein was awarded the Nobel Prize for his discovery and interpretation of the formula - E=mc2 - right?  Wrong.

He won the Nobel Prize for his explanation of the phenomena referred to as the photoelectric effect.  When light (electomagnetic energy) is shined on a metal surface in a vacuum, it may free electrons from that surface.  These electrons can be detected as a current flowing in the vacuum to an electrode.  The light was not always strong enough to cause this effect, however.  When the scientists made the light brighter, no increase in electrons was seen.  Only when they changed the color of the light (the wavelength) did they see a change in photoemission of electrons.   This was explained by Einstein using a theory that light consists of photons, each with discrete quantum of energy proportional to their wavelength.  For an electron to be freed from the metal surface it would need a photon with enough energy to overcome the energy that bound it to the atom.  So, making the light brighter would supply more photons, but none would have the energy to free the electron.  Light with a shorter wavelength consisted of higher energy photons that could supply the needed energy to free the electron.  Now, you ask, "What the heck does this idea of quantum energy have to do with a laser?".  Well, with this background under our belts we will continue.

A substance that when excited by energy emits light in all directions.   The substance can be a gas, liquid, or semi-conducting material.

The Excitation Mechanism or Energy Pump

The excitation mechanism of a laser is the source of energy used to excite the lasing medium.  Excitation mechanisms typically used are: electricity from a power supply, flash tubes, lamps, or the energy from another laser.

The lasing medium will normally emit photons in specific spectral lines when excited by an energy source.  The wavelength is determined by the different quantum levels, or energy states, of the material.  Normally, most atoms in a medium are in the ground state.  Some small percentage will exist at higher energies as well.  Normally, these higher energy states are unstable and the electrons will release this excess energy as photons almost immediately and return to the ground state.   In some materials, specifically those chosen as lasing medium, a metastable state is possible where the atom or molecule will remain at an excited state for some time.

Energy is supplied to the laser medium by the energy pumping system.   This energy is stored in the form of electrons trapped in the metastable energy levels.  Pumping must produce a population inversion (i.e., more atoms in the metastable state than the ground state) before laser action can take place.

This action occurs in the optical cavity.  When the photons that decay in the direction of the mirrors (most are lost - lasers are not as efficient as one would believe) reach the end of the laser material, they are reflected back into the material where the chain reaction continues and the number of photons increase.  When the photons arrive at the partially-reflecting mirror, only a portion will be reflected back into the cavity and the rest will emerge as a laser beam.

Now that we know the basics, lets discuss the Types and Classifications of lasers.