Skin is the largest organ of the body and, as such, is at the greatest risk for coming in contact with the laser beam.  The most likely skin surfaces to be exposed to the beam are the hands, head, or arms.

Lasers can harm the skin via photochemical or thermal burns.  Depending on the wavelength, the beam may penetrate both the epidermis and the dermis.  The epidermis is the outermost living layer of skin.  Far and Mid-ultraviolet (the actinic UV) are absorbed by the epidermis.  A sunburn (reddening and blistering) may result from short-term exposure to the beam.  UV exposure is also associated with an increased risk of developing skin cancer and premature aging (wrinkles, etc) of the skin. 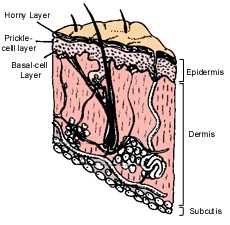 How Does Laser Light Affect the Skin?

Laser effects on tissue depend on - the power density of the incident beam, absorption of tissues at the incident wavelength, time beam is held on tissue, and the effects of blood circulation and heat conduction in the effected area.

As indicated by the illustration above, different wavelengths of light penetrate the skin in different ways. At approximately 750 nm, absorption to the subcutis occurs.

Tissue Damage from a CO2 Laser 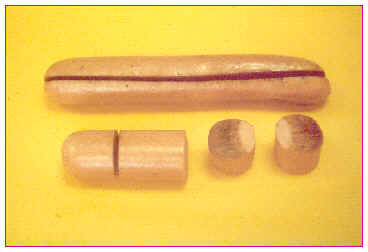 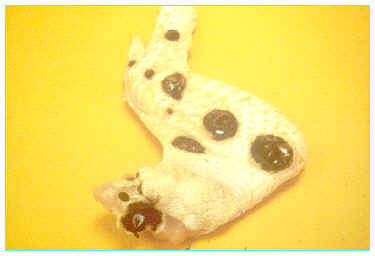 As shown above, the immediate effect of exposure to laser light above the biological damage threshold is normally burning of the tissue.  Injury to the skin can result either from thermal injury following temperature elevation in skin tissues or from a photochemical effect (e.g., "sunburn") from excessive levels of actinic ultraviolet radiation.

Some individuals are photosensitive or may be taking prescription drugs that induce photosensitivity.  Particular attention must be given to the effect of these (prescribed) drugs, including some antibiotics and fungicides, on the individual taking the medication and working with or around lasers.

The possibility of adverse effects from repeated or chronic laser irradiation to the skin has been suggested, although it is normally discounted.  Only optical radiation in the ultraviolet region of the spectrum has been shown to cause long-term, delayed effects.  These effects are: accelerated skin aging and skin cancer.  At present, laser safety standards for exposure of the skin attempt to take these adverse effects into account.