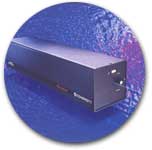 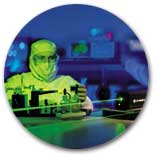 There are many types of lasers available for research, medical, industrial, and commercial uses.  Lasers are often described by the kind of lasing medium they use - solid state, gas, excimer, dye, or semiconductor.

Gas lasers (helium and helium-neon, HeNe, are the most common gas lasers) have a primary output of a visible red light. CO2 lasers emit energy in the far-infrared, 10.6 micrometers, and are used for cutting hard materials.

Excimer lasers (the name is derived from the terms excited and dimers) use reactive gases such as chlorine and fluorine mixed with inert gases such as argon, krypton, or xenon. When electrically stimulated, a pseudomolecule or dimer is produced and when lased, produces light in the ultraviolet range.

Dye lasers use complex organic dyes like rhodamine 6G in liquid solution or suspension as lasing media. They are tunable over a broad range of wavelengths.

Semiconductor lasers, sometimes called diode lasers, are not solid-state lasers. These electronic devices are generally very small and use low power. They may be built into larger arrays, e.g., the writing source in some laser printers or compact disk players.

A classification label will be found on the laser housing. This label provides important information on the hazard of the laser.

Lasers have been classified with respect to their hazards based on power, wavelength, and pulse duration. These definitions are wordy and cumbersome to read out of context, but when given the specifications of a laser or laser system are not difficult to apply.

Same criteria for classification as Class 2 but where beam may be hazardous for viewing with magnification.